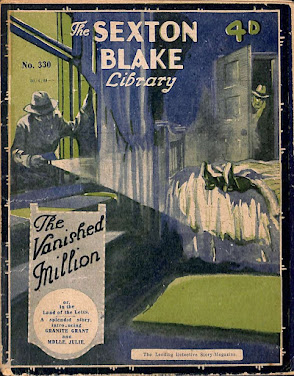 This is not one I have in my own collection, I read it online on the Comicbookplus site.

It is some time since I read it, but I remember it tolerably well hopefully.

This story features not only Sexton Blake and Tinker but also Mr Sayer`s own characters Granite Grant and Mademoiselle Julie. The action is set in both England and Latvia.

The plot is sufficiently involved to hold the readers` interest, but not so involved as to become convoluted.

The portrayal of Blake is very much as it should be - both a man of action and a thinking man, a determined purser of wrongdoers but also a man capable of compassion.

As a general thing, my particular interest is in the Blake of the post-war years but it doesn`t pay to be dogmatic about these things and I would say this was an enjoyable read for me and one I would like to revisit at some point.

Posted by Hoonaloon Collectables at 13:34